Wouldn’t it be an insult to the intelligence of the People of Idaho for Brad Little to claim that a surplus came during the dark months of a “pandemic”? So, is Governor Little being honest about a surplus or is there something else going on inside the Office of the Governor that we need to be aware of?

Over the last few months Idahoans have been receiving checks in the mail or deposited into their bank accounts from the Idaho Tax Commission along with a letter from Governor Brad Little claiming that, “The economy of Idaho continues to blow past projections, and we are leading the country in economic prosperity. We achieved historic tax relief for Idahoans for the second year in a row! We are returning your tax dollars with our record budget surplus.” In normal circumstances a state surplus would be a good thing and a governor who was truly returning taxes back to the people should be considered noble. But nothing is normal right now! The cost of living has almost doubled in the past few years, fuel prices are at a record high, inflation is spinning out of control and a major food shortage is predicted as 'imminent'. Meanwhile, Brad Little is claiming that Idaho is so financially stable that he is sending tax money back to the people. So, what is really going on? Is Idaho’s “surplus” because the governor has done such a great job or do the numbers tell a different story? 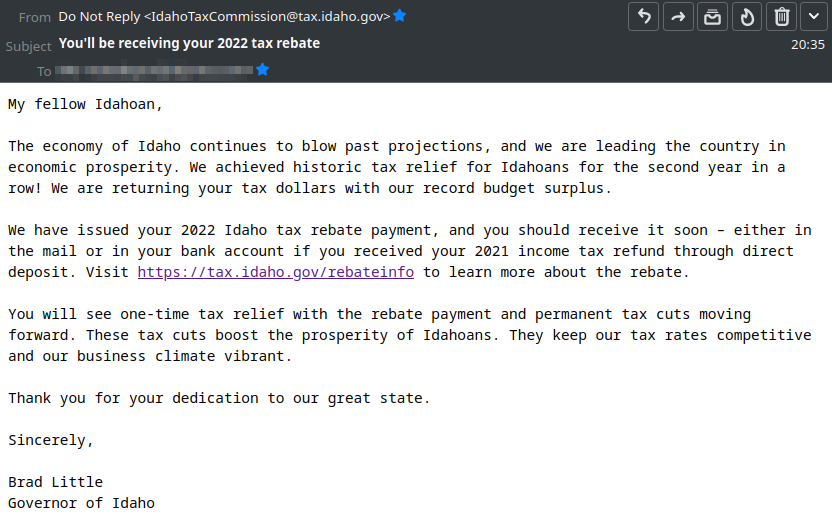 A quick look back on the past two years may help us understand how the Idaho government has so much money available to them and why Governor Little has full access to divvy out billions of dollars as he pleases. We know that Idaho did not have a surplus prior to 2020, and this newly claimed “surplus” certainly was not “achieved” during 2020 or early 2021 when Idaho’s businesses were closed, schools were shut down and record amounts of people were out of work and stayed home. Wouldn’t it be an insult to the intelligence of the People of Idaho for Governor Brad Little to claim that a surplus came during the dark months of a “pandemic”?

Let’s look at it this way. If the breadwinners in a family stopped working for nine months or more, meanwhile the cost of everything goes up, and then a few months later they claim they had more money than ever before, wouldn’t that cause you to wonder what was really going on? How about this? What if a company shut down operations for months on end, paid their employees to stay home, continued to pay all their expenses and had extremely low or no sales, and then issued a financial report recording that they had the best year they have ever had. Wouldn’t that cause skepticism? Simply put, there is no ethical way that the Idaho government has had the best two financial years they have ever had. There is no way that a true surplus was “created” during the lock-downs of 2020 and 2021. So, is Governor Brad Little being honest with the People of Idaho or is there something else going on inside the Office of the Governor that we need to be aware of?

Now you may be thinking, Governor Little would not report the state's finances untruthfully. He would not get away with lying because it is all about numbers and reports. This is true, and is the very reason we know the governor is not being honest with us. In Brad Little’s last letter to taxpayers he wrote, “We achieved historic tax relief for Idahoans for the second year in a row! We are returning your tax dollars with our record budget surplus.” These words reveal the truth of what Governor Little has done but are phrased in a way to make people believe that a surplus was created because of the good management of the Idaho government when in reality that’s just not true. Let’s break this down.

There is no doubt that the many people moving into Idaho the last few years boosted the Idaho economy, even if it is temporary and volatile. People bringing their wealth into the State is financially beneficial, but is not the reason Governor Little CAN and IS pushing millions of dollars back to the taxpayer. The reason Governor Brad Little is depositing funds into Idahoans bank accounts is very simple, IT IS CAMPAIGN SEASON and he hopes to buy your vote! Now the reason he has the funds to deposit millions into Idahoans bank accounts needs more explaining.

Then on March 25th 2020, (12 days later) Nancy Pelosi and President Trump announced a $2 trillion federal relief package for States that were in an “Extreme State of Emergency”. That very same day (March 25th.) Governor Little implemented never before used Martial Law and put the State of Idaho in an “Extreme State of Emergency”. Idaho had had no COVID deaths and reportedly only had 136 COVID cases. It is clear that Brad Little did not lock the People of Idaho down because he was concerned about their health and safety, but instead he forcefully closed small businesses, shut down churches, and oppressed Idahoans everywhere to qualify for massive amounts of federal COVID money. And boy did it pay off! 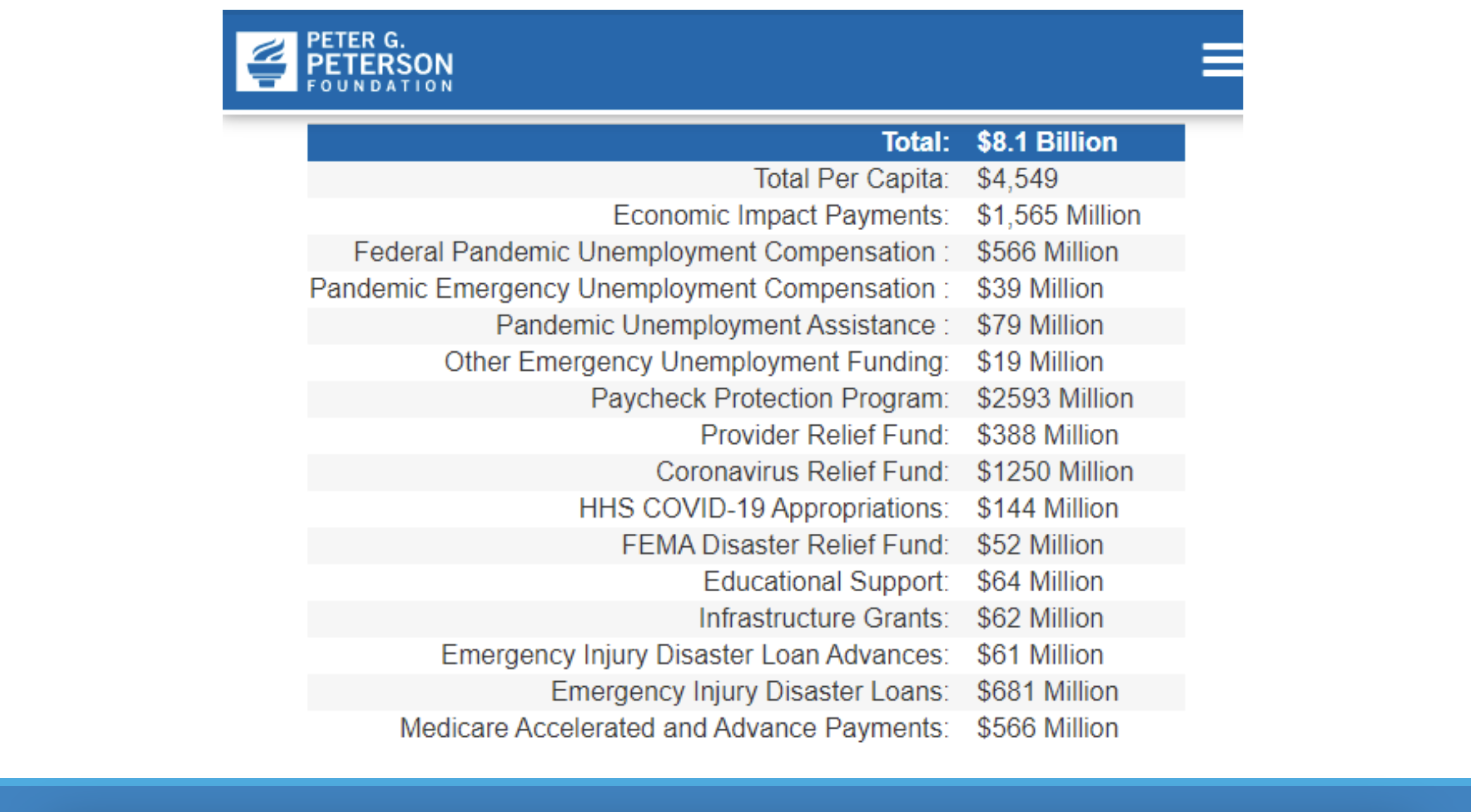 Shortly after declaring Idaho to be in an “Extreme State of Emergency”, Governor Little received $1.25 billion of the federal emergency funds and thanked President Trump for the installment. Then on April 7th 2020, by declaration, Governor Little created a COVID Financial Advisory Committee (CFAC) “Comprised of members appointed by and serving at the pleasure of the Governor”. Governor Little then directed the federal funds to be administered by the Office of the Governor, his office, bypassing the Idaho Legislature. Little continued to receive massive amounts of federal relief funds in increments, sub-totaling $8.1 billion, then $12 billion and finally $18.7 billion dollars.

So, when Governor Little says “We achieved historic tax relief for Idahoans for the second year in a row!” he is not kidding! But he did not “achieve” this because Idahoans are thriving under his leadership. In fact, it is just the opposite! He has further put Idahoans under the ruling hand of the federal government by signing new federal Memorandums of Understandings (MOUs) in order to obtain the federal COVID emergency funds that Idahoans did not need in the first place. By doing so he has increased the already massive national debt that our children’s children will be paying for if a collapse does not happen first.

Now, Governor Little is using these liberal acts of fiscal irresponsibility to tout how he has been so responsible with Idahoan's tax money that he is “returning your tax dollars with our record budget surplus.” Deceiving Idahoans into believing that we are in a great fiscal situation when in reality we are going to have to pay the piper someday and it’s not going to be pretty!