What do Idahoans think about the Governors Race? The Truth May Shock You!

Survey Monkey ran a state wide independent poll questioning Idahoans about the governors role and this race. The results, I think you will find fascinating. At least I did. This is not an effort to campaign but to inform you of how people are thinking in Idaho.

I want to give you some information that I just found out about. I’m going to get a bit analytical with you so stick with me, I think you will find what I’m going to show you very interesting.

As you know the governor’s election in Idaho is coming up next year and since Idaho is a mostly Republican state, whoever wins the Republican primary in May determines who the Governor will be.You also may know that there are three main candidates in the race: Governor Brad Little, Lieutenant Governor Janice McGeachin, and Ammon Bundy. Yeah, that’s me (I just referred to myself in the third person). Anyhow, yes, these are the leading candidates in Idaho. Now what I am about to show you will solidify the candidates in this race and tell us a lot about the voters in Idaho. This poll shows you what people in Idaho are thinking when it comes to the governor and what liberty loving Idahoans like you and I must to do before May of 2022.So here we go...Survey Monkey ran a state wide poll questioning people in Idaho about a governor's role and the race for a new governor. I think you will find the results fascinating. At least I did. The first question that was asked is, Would you agree or disagree that a state governor has the authority to shut down churches?Now to me this was a no-brainer, and most Idahoans agree. In fact, 60% of Idahoans agreed or strongly agreed that the governor does not have the authority to shut down churches. 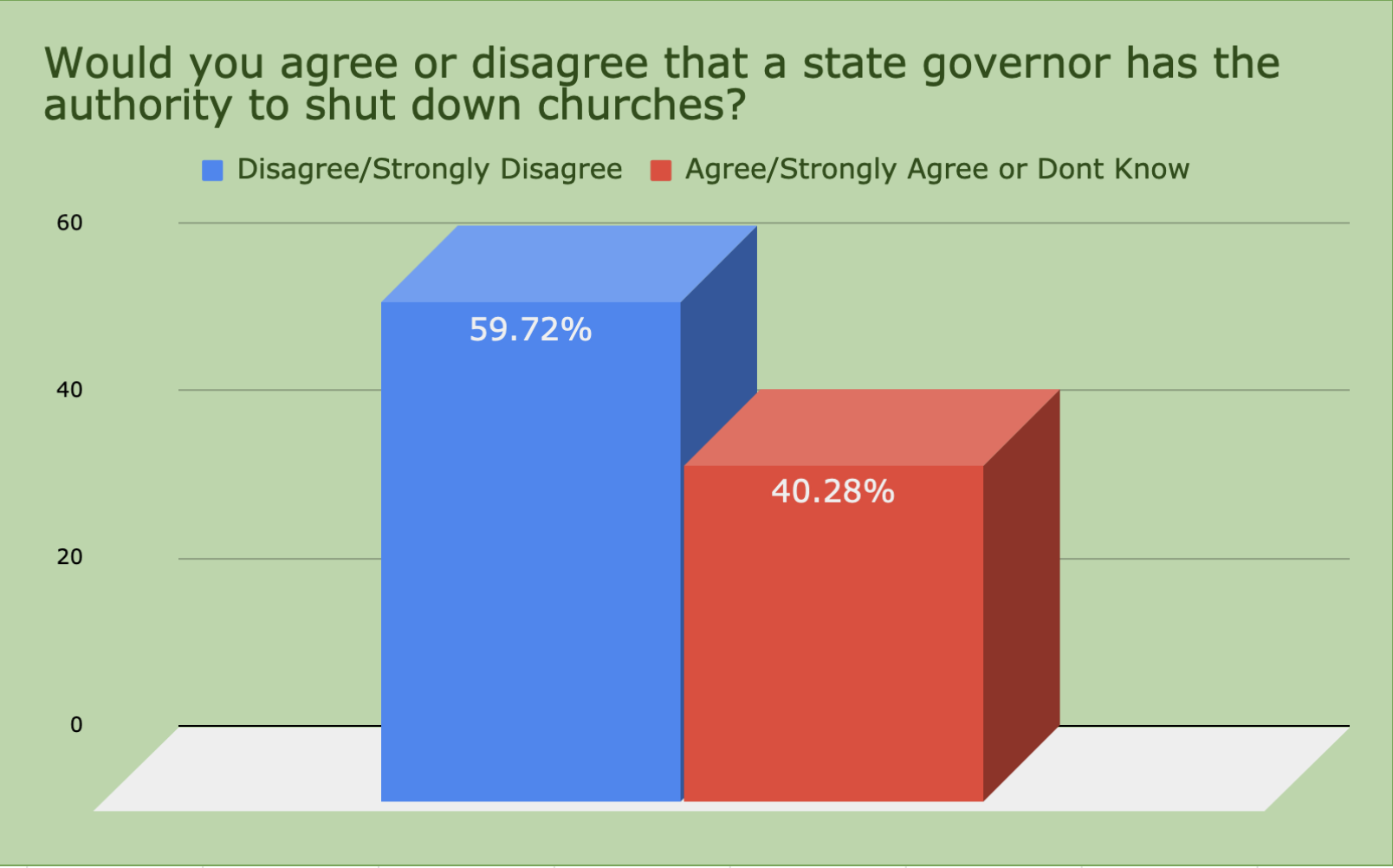 However, surprisingly enough, 40% of Idahoans did not know or AGREED that the governor has authority to shut down churches!

I wonder if they have ever read the First Amendment. Do they not know that the U.S. Constitution prohibits any government official from restricting the free exercise of religion? Of course that includes shutting down churches! But 40% of Idahoans do not understand that governors have no lawful authority to shut down churches, restrict travel, or to close businesses.

The second question Survey Monkey asked was, Would you agree or disagree that a state governor has a duty to protect the people's rights to worship, travel, and trade with each other?

This one was more definite, and once again the majority of Idahoans agree. 74% agree or strongly agree that the governor has the duty to protect Idahoans rights to worship, travel and trade. 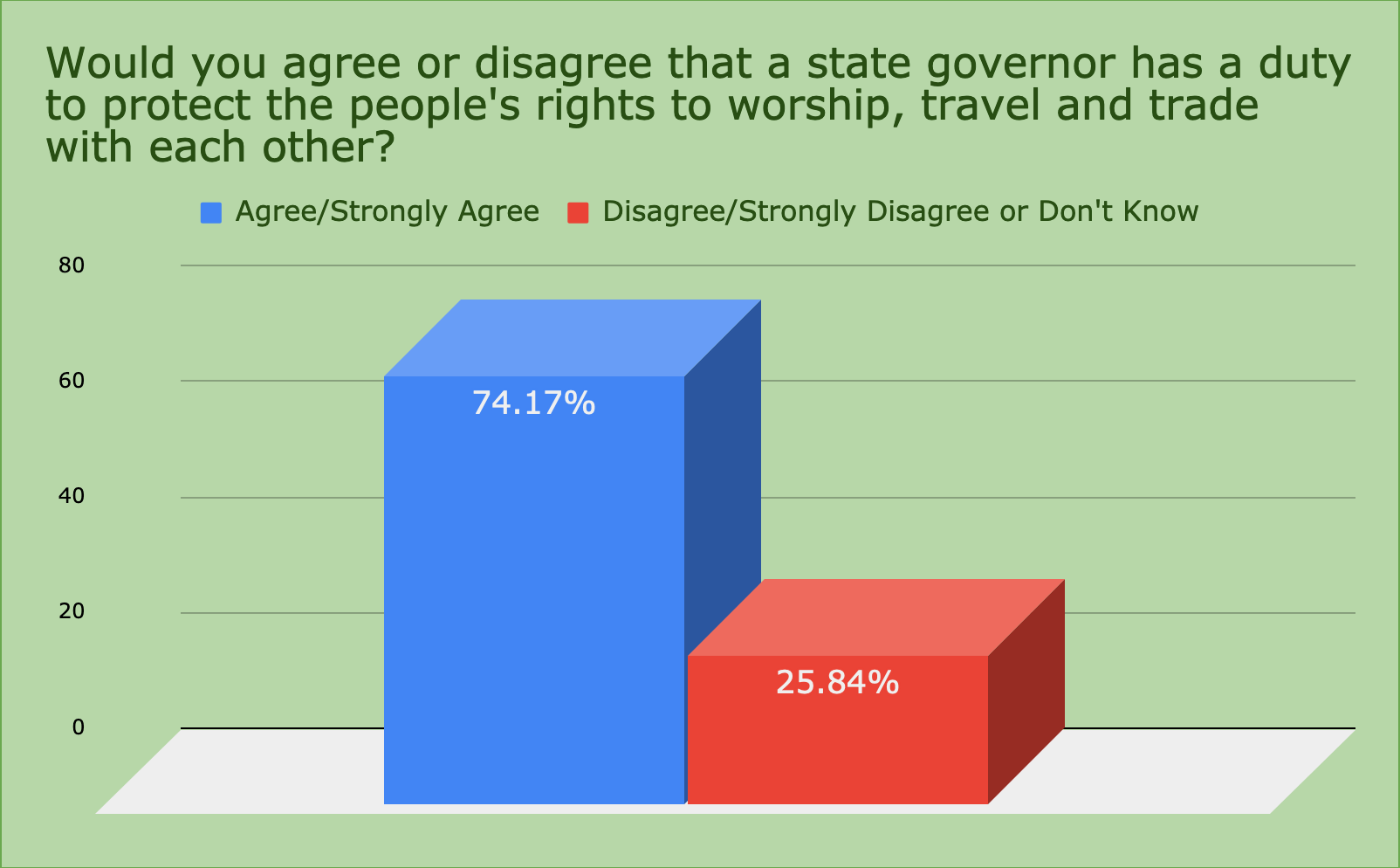 Okay, here’s where it gets really interesting!

As you know, in Idaho, during 2020, Governor Brad Little issued multiple executive orders to shut down churches, restrict travel and close “non essential” businesses. It was the greatest infringement of Idahoans' rights ever know in the history of Idaho. Still to this day churches, businesses, and our economy have not fully recovered. Many churches and businesses never will. We have yet to pay the piper and the piper always gets paid!

So, what do the people of Idaho think about what Governor Little did to them?

Well, Survey Monkey asked this question to Idahoans all over the state, Out of the top governor candidates in Idaho, who do you believe would be most willing to stand up for your right to worship, travel or trade?

I have to say these results were a bit surprising to me as almost 40% said Governor Brad Little would be most willing to protect their rights to worship, travel or trade. 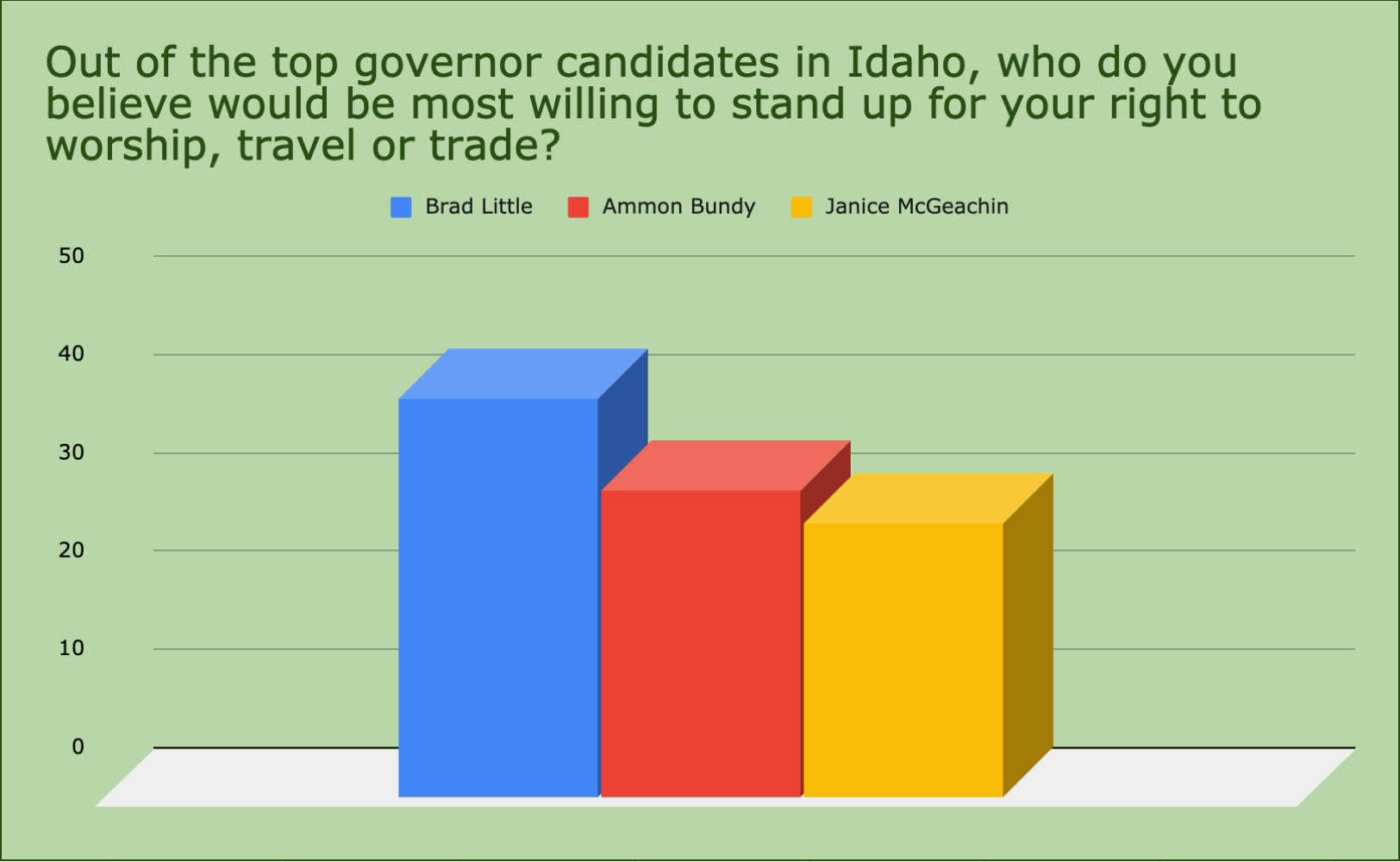 The disconnect is astonishing! This 40% of the people in Idaho must not realize what Brad Little did to them! They must not realize that he ordered churches to be shut down, ordered people not to travel unless they were authorized and ordered most small business to close their doors. He even sent the Idaho State Police around to raid small businesses that refused to close during the order.

So you can see we have our work cut out to show these people what Brad Little and his buddies are doing to Idaho.

Now these questions were not the only ones that are significant in this survey. Some very interesting numbers showed up that bring a lot of hope to me and it should to you as well.

A final question was asked, If the elections were today who would you vote for as Idaho governor?

Calculating in the ultra conservative Idaho voter, this poll shows Brad Little leading the contest, Ammon Bundy gaining on him at second, and Janice McGeachin bringing up the rear with a small number indicating they are not voting or writing in another candidate.  Remember, this was a statewide poll conducted by a professional surveying company, and not some straw poll in a small area with a highly subjective crowd.

Also, we must recognize that polls are only a snapshot in time, but at this point in the race I'm very encouraged with this last question.

I hope you can see that you and I TOGETHER have a lot of work to do. If we work hard together we can get the message out about what Brad Little has done and tip the scales to win this election.

Everyday the momentum in our campaign increases. We already have over 200 active volunteers for the Ammon Bundy for Governor campaign. Our campaign is the most organized, functioning, and effective campaign of all the candidates. Go and see for yourself! Check out Janice McGeachin's website and her campaign efforts. Check out Brad Little’s and compare them to VoteBundy.com and our team. Also, come to one of our events, they are all listed on our Campaign Calendar. Listen and see the difference, I AM FIGHTING FOR ALL THE PEOPLE IN IDAHO!

Now the challenge that I face in getting this message out is very simple to overcome. The mainstream media companies owned by socialists who hate this country, and especially Idaho, do not want me to inform people. I am being heavily censored and discredited by outlets like Facebook, Google, NBC, ABC, CBS, Associated Press, and others. The solution to this challenge is to use paid advertisements. By law, these socialist companies can’t stop paid ads because I am an official candidate. But these ads cost a lot of money.

We must get the word out about Brad little! People simply don’t understand what he did to us here in Idaho and we need to inform them! Go to the link below and donate! Also, don’t forget to subscribe to my emails. If you have thoughts or question for me just reply back and I will answer every one of them.

We must work TOGETHER to Keep Idaho IDAHO!